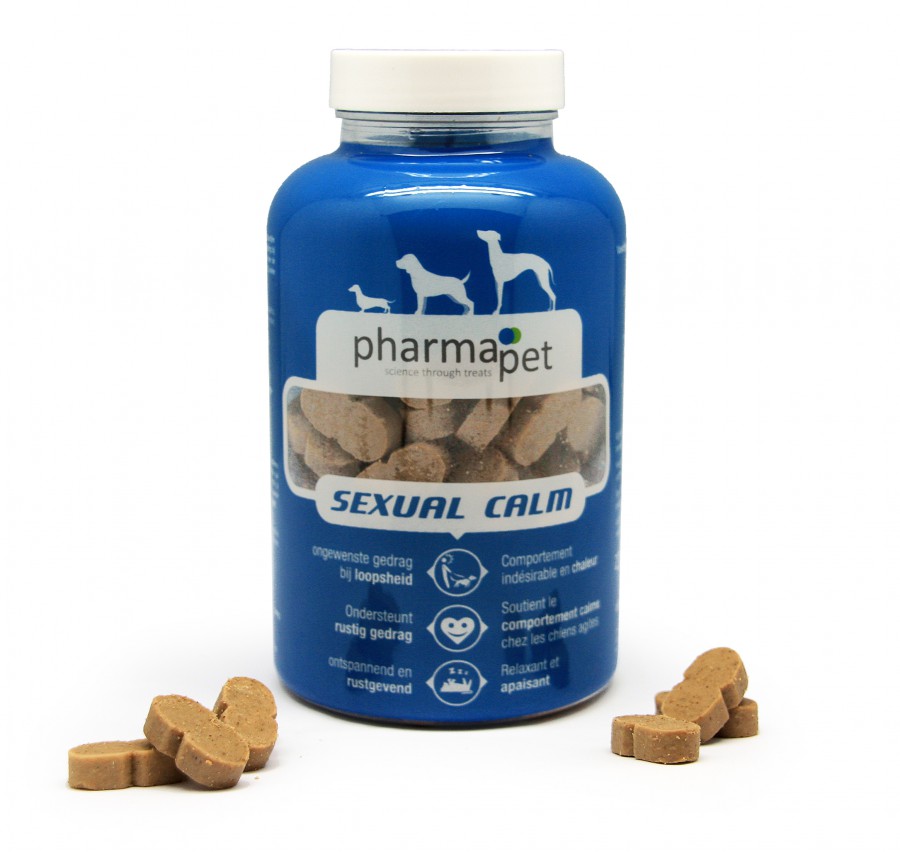 Dietary supplement enriched with concentrate from natural raw materials such as L-tryptophan and angelica that support quiet behaviour in agitated dogs.

Some dogs show unwanted or agitated behaviour faster than others, which does not always make the education easy. Sexual Calm works on two aspects: on the one hand it helps in the education of nervous animals, and supports the quiet behaviour of (male) dogs that are often agitated. On the other hand, it corrects the unwanted behaviour in estrous cycle of both male and females. Sexual Calm corrects the behaviour during the  estrous cycle but has no effect on physical expression and fertility.

In the high north of Europe, the Angelica Archangelica is a very ancient pagan plant that would protect against all kinds of scary diseases, witches and even evil spirits. The plant, also called angel root, would have been brought to earth by an archangel to protect man from the plagues and epidemics that plagued them. It used to be believed that its heavenly, healing powers could even cure the plague. Whether that’s the case we doubt, but the herb is certainly  a pleasant tonic for the nerves. The organic acids that are located in the plant have a sedative effect, which helps to support quiet behaviour in agitated dogs.

Supporting calm and preventing fears and drifts can lead to better health. The aptly named monk pepper or chastity tree suppresses the lusts and has been used in classical antiquity to preserve chastity. In medieval monasteries it was processed in the food and interspersed on the monks ‘ beds to keep the lust under control. Today, it is mainly used to relieve various hormonal discomforts and bring the body back into balance. The Vitex Agnus Castus has a harmonising influence on females’ hormone management and males’ testosterone levels. Furthermore, the monk pepper contains compounds that have a mild influence on the dopamine level and it also works calming.

L-Tryptophan is an essential amino acid, which means that this substance must be absorbed with the diet because it cannot be produced by the body itself. The molecule of L-tryptophan is converted in the body to serotonin (the happiness hormone) and melatonin (the sleep hormone). Since the seventies, tryptophan has been used as a therapeutic means to counteract chronic insomnia, because it promotes sleep and dampens fear. To give your dog the optimal peace of mind and to reduce or prevent unwanted behaviour. Tryptophan plays a role in mood, emotion, sexual activity, sleep and self-confidence of your dog. As a neurotransmitter, it contributes to a positive state of mind and a calm, well-behaved posture.