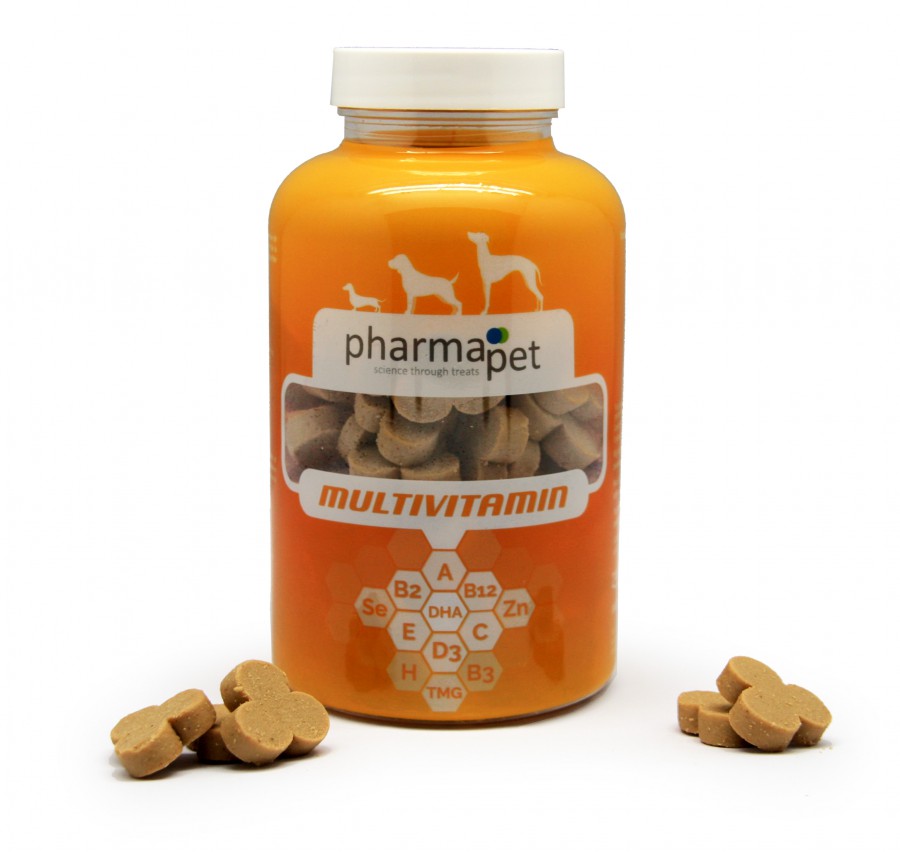 Dietary supplement enriched with numerous vitamins and minerals that help to maintain health.

To be used for maintaining health

Prevention is better than cure, right? That’s why we want to arm your dog with an arsenal of vitamins and minerals to support general health, give more energy and support the defence system. Let us take a look at the vitamins and their influence on the body. Vitamin A, or retinol, is important for the production of cells, among others, your skin and hair. It supports normal growth and healthy skin, bones, hair and nails. As a building block of a pigment in the eye needed to see well in the dark, it promotes the proper functioning of the eyes. Just like vitamin E, D, B2 and C it is an excellent antioxidant, which protects the body from breaking down through free radicals. They protect the cells, bloodvessels, organs, eyes and other tissues. Vitamin E is a real hero here: it helps to slow down the aging process of the body. It has also been shown that vitamin E improves certain actions of the immune system, which are normally diminished by the aging of the body. Vitamin D promotes calcium absorption, which will benefit the growth of bones and teeth. This vitamin also maintains the nervous system.

The large resistance increaser is vitamin C, which also stimulates the production of hormones and promotes the uptake of iron. Both Vitamin E and C are as antioxidants supported by selenium. In this formula we opted for organic selenium, which is better absorbed by the body than inorganic selenium. How do all those free radicals come into our bodies? During exertion the muscle produces waste: free radicals and peroxides. These residues are neutralised as it were by Vitamin E and selenium. This last compound ensures the conversion of hydrogen peroxide (H2O2) to water (H2O) and counteracts the oxidative change of fats. In this way, selenium doubles the blocking of the occurrence of free radicals. With supplementation of selenium increases the antioxidant effect, which can reduce the risk of muscle injuries.

Furthermore, we added a vitamin B complex to this mix, with biotin (or vitamin B8) that has a positive effect on the general health of the skin, the hair and the nails. It is an important building block in the growth and recovery processes of the aforementioned tissues. Animals lack the ability to produce this substance, unlike micro-organisms and plants. As a result, it is found in different foods, but rather in low concentrations. Biotin supports the restoring ability of the skin and helps in the care from inside out. It also contributes to the preservation of strong and shiny hair. Like betaine, vitamin B2 contributes to the digestion of proteins, carbohydrates and fats, as well as keeping  the skin and hair healthy. You need vitamin B3 to extract energy from your food. It is also known under the name ‘niacin’ and provides a well-working energy metabolism. Finally, vitamin B12 contributes to the general cell development and the functioning of the nervous system. Indispensable, and only found in animal products such as meat, fish, milk and eggs.

We would like to look at the effects of carnitine, which is supporting when burning fatty acids. A deficiency of carnitine can cause fatigue and weight gain. DHA contributes to an increase in brain functions. DHA improves concentration, focus and memory, and is very important to brain function at any age: studies have shown a significant improvement in memory and response time. With aging, the DHA content decreases in the brain tissue and increases oxidation. This is associated with age cognitive decline. The intake of Omega 3 fatty acids can slow these processes before this culminates in dementia. Finally, the zinc-chelates remove heavy metals from the body. To simplify it very much: chelates have so to speak molecules with four arms with which they can group and bind other ions around themselves. In this way they can bind and drain the metal. The boy absorbs this type of zinc more easily. by the body. In general, zinc contributes to the renewal of tissue and the support of hair growth. Zinc also acts as a co-enzyme with immunity. In short, this mix works on various aspects and processes of the body, in order to help support good health, immunity and vitality.