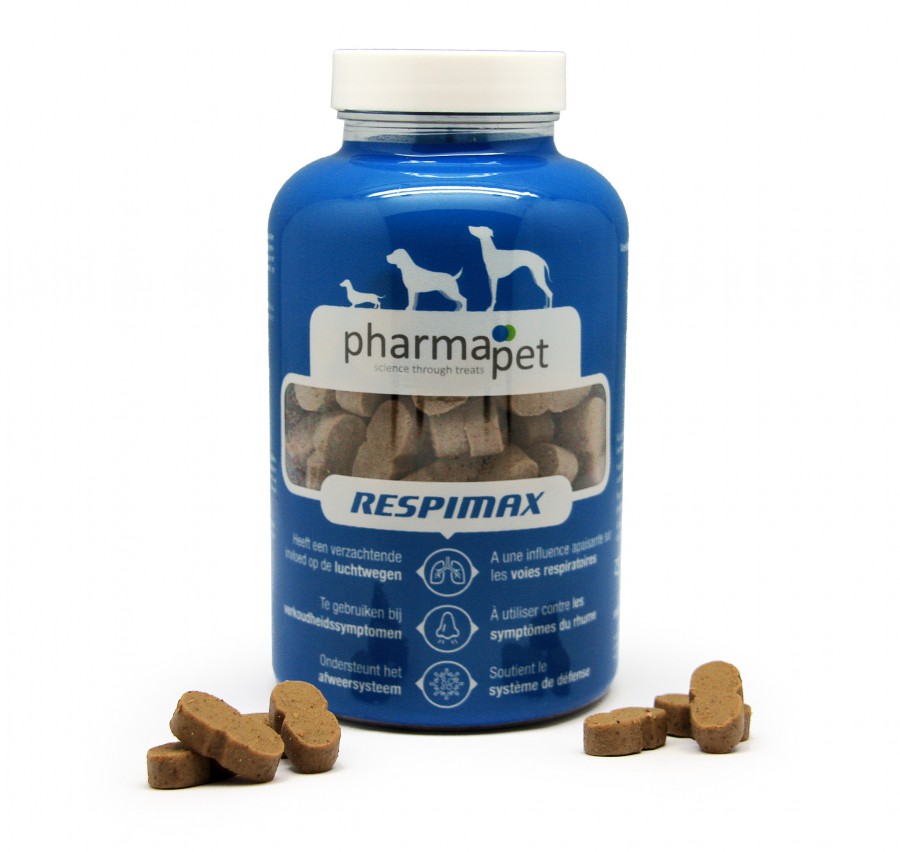 Dietary supplement enriched with concentrate from natural raw materials such as eucalyptus and echinacea that help alleviate cold symptoms.

Supports the healthy functioning of the respiratory system

Has a soothing effect on the airways

Everyone knows it: it gets darker faster, outside it feels slightly chiller and the leaves start to discolour beautifully. Autumn is in the country! And the colds unfortunately also... Not only people experience cold symptoms, dogs also suffer from mucus and slime regularly. There may be mucus coming out of his nose, but he can also produce too much drool or mucus or continue to cough. Time to relieve that irritation of the respiratory tract and tantalising cough!

Every autumn, eucalyptus is used smoothly in most households to repel the worst symptoms of colds. This plant originates in Australia and is no longer solely used to cut out didgeridoos. Various types are used for producing eucalyptus oil. The tree consumes an enormous amount of water and grows very fast. It is therefore planted to dry wetlands and thus keep down malaria mosquito population. Eucalyptus works directly on the cells of the bronchi, where it destroys the mucus and helps to loosen it. This way the airways are cleared. In Addition, Eucalyptus also has an antiseptic effect, which counteracts the development of bacteria and fungi.

Plantago Major is better known to us as the great plantain, a plant that you find here on almost every roadside. The leaves are often administered to relieve dry cough and softening of mucosal inflammations in the respiratory tract. But how does it work? The extracts of the leaves improve the activity of the vibrating hairs of the respiratory epithelium (the lining of the airways), which causes the mucus’ excretion to increase and facilitates the coughing. The sputum, or the mucus that is coughed up from the deep respiratory tract in case of an infection, is diluted by the action of plantain. Different experts also cite the antibiotic properties of plantain. It is therefore one of the oldest medicinal plants: in China, plantain was harvested for medical use more than 3000 years ago. Also with the ancient Greeks and Romans the healing effect of the plant was not unknown.

Echinacea occurs naturally in North America, where the indigenous tribes discovered the healing effects of the plant. They used the herb to remedy and prevent all kinds of wounds, infections and diseases, and even snake bites were successfully treated with it. Over the years, the plant was also introduced in western medicine, and meantime it is one of the most popular means of strengthening natural resistance in both North America and Europe. Both the flower, the leaf and the stem, as well as the root are processed in all kinds of preparations.

Research has shown that Echinacea is effective in treating or helping prevent flu, colds, and all kinds of infections. This is because the plant is an immuno modulator - that is to say that it improves the quality of first-line resistance and brings it to a state of preparedness. Furthermore, Echinacea increases the number of white blood cells to fight infection. Sounds like a miracle cure? Your quadruped will not become immune to all diseases, but the symptoms will be reduced and the recuperation will take place much faster.

Respimax is perfect for dogs with reduced resistance, to support a healthy respiratory system. Does your dog suffer from decreased appetite or vitality due to cough and formation of mucus? Even after the dog shows all the symptoms, a good cure can help reduce the phenomena. The aromatic plants contain substances that have a protective effect on the bronchi and lungs, but also on the intestines. They play an important role in the field of immunity. The active substances from plant extracts are expectorant and disinfectant at the level of the respiratory tract.